So as many of you who are subject to me having your e-mail recently found out, Narda and I received iPhones recently.  When we were at the apple store, trying really really hard to focus on JUST the iPhones, and on keeping Malka entertained (thankfully, the iPods had some groovy disco and headphones), I asked the fated question: “So um, when I try to sync this to my ibook…” “yes, it will spontaneously combust.”

We sighed together, and decided we really did need a new computer.  Narda’s laptop keeps crashing, and mine has just 1 more gig of memory than my iPhone, and is as slow as molasses.  So we bit the bullet, and used Narda’s academic discount and got an iMac.  Shiny and new!  And FAST!

A few days later, I had to go back and get an airport, as the old one just didn’t have enough umph to reach the bedroom from all the way in the living room. (I can now access the internet from across the street if I wanted to!) I feel like we’ve really jumped by leaps and bounds into the 21st century.  (yea us!)  Narda even joined facebook today, and Uncle Bobby finally accepted the flickr invite, so he can see all of those cute pictures of he and Malka together.

Well, who’da thunk it, but this here new-fangled machine has a video camera on it!  Wahoo! 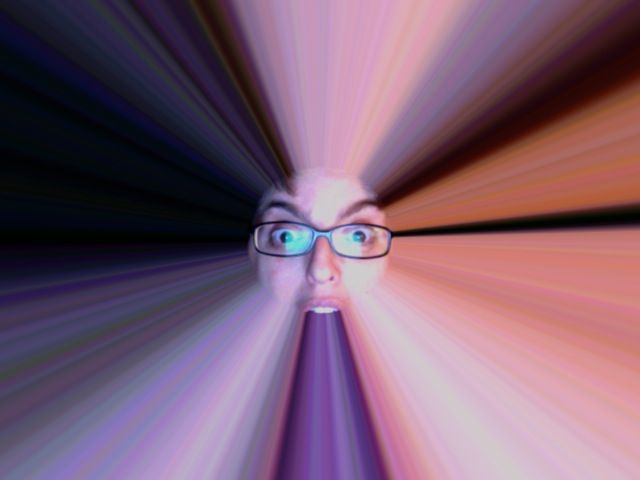 And here’s a funny picture of me, in photo booth – COOL, huh?

And even more exciting, is that I now understand what that little box by someone’s name in my gchat means!  It means they have VIDEO CHAT!  Woah.  So you know what?  I tried it out.

And I’m happy to report that the Littlest Pea popped my video chat cherry tonight.  Thanks, J and S!  It was fun.  so if you have videochat enabled, just give me a ping, as long as I’m “green.”  🙂

6 thoughts on “Because I said I would…”

Where was that thing about the thing?

I’ve been at this a while…