So yesterday, Malka and her friend, Afek were running around, and Malka, being taller than many of her peers, and Afek, being shorter, well, Malka is literally a head taller than Afek. And they were running. And they crashed into one another. And her teeth embedded themselves into his eyebrow. But apparently, his eyebrow is fine. (I saw it today.) The same cannot be said for Malka’s two front teeth. Nothing like an emergency to create one’s first trip to the dentist. Miss Sheila called me as Noah Matan and I were walking home last night, and thankfully, she started out with: “Malka’s fine.” “But…” and then proceeded to describe the “toothcident” in detail. Which I pictured in my mind the entire time. OOF. I pictured the worst case scenario, but Sheila assured me it was just loose, but she was concerned.

When we get home, I scramble to find that piece of paper with recommendations for Pediatric Dentists from Malka’s doctor, but alas. So I turn to my good friend google, and I find a dentist that is close to Malka’s school. Bonus. I call, fully expecting an answering service. But I got a human being. Lovely Dana! And she secured us an appointment for today at 1:00pm. A little fenagling with my work schedule, and voila, we were set. And then. She said those famous last words: “Does Malka use a pacifier?” “Um, yes, but just for sleeping.” “Oh. OK, it may be a rough night for you, but no pacifier until she sees the dentist.” “And just soft foods. Like yogurt, applesauce, and ice cream.” GULP.

Miss Sheila and Malka show up around 7:45 or so, and I see my poor baby with a fat lip, and a bloody, loose tooth. I proceed to dole out motrin, ice cream, and a smoothie – Malka thinks she struck gold. She finally conks out around 10pm, even though she went to bed around 9 – (no paci, remember).

Noah Matan wakes up for his usual 2:30am party time cocktail hour, and after I get him all snuggled back in, I hear Malka start in with the moaning and crying. I try to wait it out a while, but to no avail. So I go in, and she’s a right mess, asking for her paci. I load her up with tylenol, and get in bed with her until she falls asleep. Noah Matan wakes up at 5am, raring to start his day, and Malka follows suit at 6am.

I am a zombie.

Narda takes Noah Matan to daycare, and I take Malka to the dentist. She is shy at first, but turns out to be a ROCK STAR SUPERSTAR! She’s even laughing with the dentist. They totally did not pay me to be their spokesperson, but um, this will be Malka’s dental practice until they kick her out – it was that awesome, and inexpensive. And 3 blocks form her school! She even sat still for the X-ray.

What the X-ray shows is that the nerve above her left tooth (think stage directions here) is totally dead, gone, missing. It’s been filled in by bone, and her right front tooth has barely any rot there at all.

He asked if there was a previous injury. Um. Um. Remember that wall thing a while back? No? Let me refresh your memory… 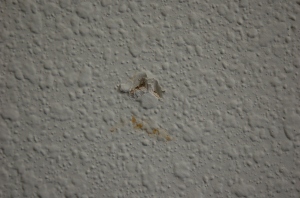 We were in DC, visiting our friends at ADPROB, and Natalie wasn’t even really a full on walker yet, but the girls were playing on a futon on the floor of Jenny‘s apartment, and Malka, (per usual) was being her wild and silly self), and somehow, with FOUR ADULTS SITTING ON THE FREAKING FUTON, she still managed to face plant INTO THE WALL. As evidenced by the teeth marks above. Didn’t think anything of it at the time. I mean, minor worries, but generally? We all figured she was more or less fine….

Um. OK, see the x-ray above? Her body has indeed, been fine, and healed the spaces, but yeah, that initial fall messed up her two front teeth pretty bad. But the thing is, they have always kind of stuck out, so it was bound to happen.

So now? Malka is on the soft foods (all she heard the dentist say was ice cream) diet, and we go in next week to see if the teeth are still there. If they are? He will pull them. He does not envision them healing themselves again, and he thinks they will continue to be loose, but there’s always a chance. He also doesn’t want to wait too long, for fear of the teeth coming out while she is unaware, and aspirating them or something. He said to not be alarmed if they change color, and if we DO have to pull them, because of the dead root issue, it wouldn’t hurt her at all. And the underlying bone and jaw is doing great.

But NO paci, sippy cups, straws, or any pressure on her front teeth. She is to chew on the side, and eat soft foods. And the NO paci part? THAT is going to kill me over the next few days.

Where was that thing about the thing?

I’ve been at this a while…